A downloadable game for Windows and macOS

Hey, you found my dumb little game! Way to go! Here's a little information about it before you play.

I made this little game prototype for the "Extra Credits Game Jam #5". I had big plans for it, but it ended up falling short. I'm a novice programmer at best, and I don't have much experience with the craft. I plan to get better, but this is all I got for now. I didn't put as much time as I wanted into it either, so it isn't at its full potential. I did however write an awesome NES-inspired song for it though. My composing skills are much better than my programming skills. If you plan to play it (which I hope you do), just know that it's not that great and could do with some more work. Controls are next:

Press Enter to start game, and press it again to restart game.

You can move and aim upwards with the Arrow Keys.

Press the Spacebar to jump.

Press the Escape Key to quit the game.

If you can beat the big ghost at the end, you win! Have fun!

All other Sprite work: Jorel Simpson

Made in GameMaker Studio 2.

I know that there is a lack of a health gauge, lack of more enemies, lack of exciting levels and graphics, and lack of fun in general. If you want to, tell me how else I could have made this game better. I'm always willing to learn more about game programming. Thanks for reading to the end. Go and hunt some ghosts!

Click Download. It will download. After it downloads, click "Run". Something will probably say "Your PC was protected." Click "Run Anyway", I promise nothing bad will happen. Then something will probably say, "Do you want to allow this app to make changes to your device?" Press "Yes". Again, I promise nothing bad will happen. Then the GameMaker Studio 2 License Agreement will pop up. Just agree to everything. Next. Install. Next. Finish. There you are. Have fun playing.

Final thoughts:
Although it had some minor flaws, I really enjoyed playing the game. Great game! 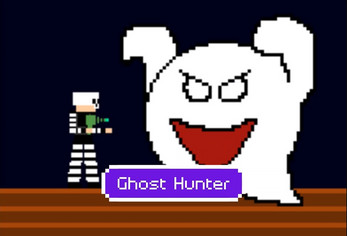